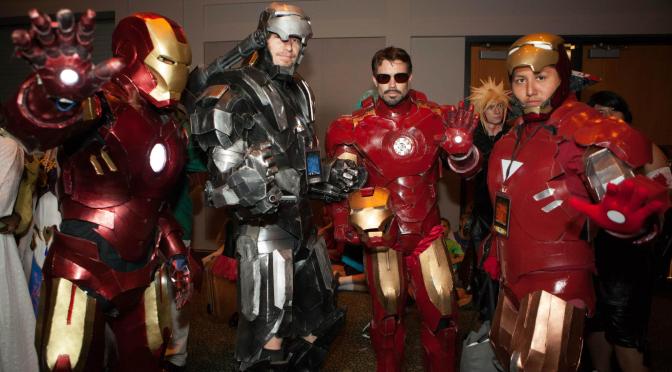 Those of you who may or may not be have been aware, last weekend saw Wales Comiccon open its doors for another kick ass event.

With this being my first EVER convention experience, (Yes, I know) I was completely unaware of how this day was to be structured. So upon buying my early bird ticket a couple of months back, I was completely in awe at the sheer scale of the event. Armed with a camera, a can of Monster, some sugary sweets and my early bird tickets, I was ready to take on this monster.

The sold out event opened its doors to the masses of early bird ticket holders at 10 am who were eagerly braving the early Sunday morning low temperatures to get into the huge venue at Glyndŵr University in Wrexham. The queue consisted of the usual fans who made the effort to dress as their favourite fantasy and sci-fi characters as well as the casual goers (Like me) who turned up in themed t-shirts and hoodies. The event had completely enveloped the University campus with various shows and randomly dotted attractions across the site which made the enormous queue completely worth it. Queuing fans were greeted by Storm Troopers and mischievous Utini who were keeping the mood before the presence of the one and only Chewbacca who was on site to help entertain as well as raise money for charity. (As Wookies do of course)

The gates opened to the masses who poured their way into the main building filled with enough sci-fi geekery that had me acting like a kid on Christmas Eve. With booths that had the likes of Garrett Wang, Dave Prowse, Garrett Wang, Eve Myles, the majority of the Red Dwarf crew (Minus Dave Charles and Danny John-Jules), Wrestling legends (Rob Van Dam and Hacksaw Jim Duggan) and Rusty Goffe to name a few. The cast of Game of Thrones and Atlantis were also on hand to sign photos and provide informative and entertaining panels, all of which had scores of fans waiting patiently in line to get a behind the scenes view of the actors and artists who create these epic characters and storylines.

The main hall was also the main base for a lot of the official merchandise offered by numerous vendors who were not only willing to take your money but were also willing to stand and chat with the fans. This not only made the main hall a hive of excitement but also gave the place one hell of a buzz as soon as you walked through the door. Comic Book artists and cartoon voice over artists were also on hand to show us some amazing artwork which would have been right at home on the wall of my spare room. (For the kids of course)

I couldn’t help but get a selfie with Garrett Wang a.k.a Harry Kim

Moving away from the main guest room, you were given the chance to enter TableTop tournaments and be shown demos on the latest and greatest table top games such as Warhammer 40k, Star Wars Armada and Munchkin. This was near the outer doors heading out onto a large open area where there was plenty more to see and do, in one direction you would stumble upon the merch (Merchandise) store, selling everything from comics to figurines, life sized cut outs to replica outfits. In the other direction were a whole lot of cosplayers, ranging from Doctor Who, Constantine, Anime and game characters along with the large amounts of super heroes. These guys were both pro cosplayers as well as people who dress up just for the sheer fun of it. And you can tell that every one of them enjoyed the attention they were getting from the amount of people wanting to get their picture taken with them.

Behind these masked heroes was the gaming bus and gaming marquee. This marquee had to be the same size as a small circus tent filled with retro and current gaming platforms that seemed to go so well together. With classic games such as Mario 64, Tekken and Lemmings on the go, the classic consoles were gaining a lot of the crowd’s attention. Lining the sides were vendors selling gaming merch and apparel that even had me foaming at the mouth. There were also artists selling their wares too with some pretty amazing artwork. Many were also taking commissions. The gaming tournaments at the far end of the tent had the crowds suitably entertained too with a variety of PC games on show.

Guest stars also offered Q&A sessions to fans in the many lecture theatres located on site, these gave fans an insite of how their favourite character came to be and some funny stories about the actors too. Did you know Garret Wang almost ran over Harrison Ford in a golf buggy before his part in Clear and Present Danger??

I did manage to get to speak to some stars while they were randomly walking through the corridors. I’m not sure Chris Barrie was aware where he was supposed to be parking his car but he did seem concerned that he wasn’t about to get his beloved vehicle clamped. This not only gave me something to chuckle about but also made me wonder how badly he had actually parked his car. I was close to finding out later on in the day when he walked outside towards a rather nice purple Dodge Charger that was sitting rather awkwardly in the car park. Sadly though, it wasn’t his and so I shall never know if his car was clamped or not.

The entire event was a complete success in every way, with not one sad face in the crowd for the entire day, I think this in itself says how awesome event was. Safe to say I will be booking my tickets for next year.